Bridging the Past, Present & Future

It is an impressive structure no matter the perspective or season. But encased in its winter coat, the Red Cliff Bridge (RCB) seems to show off its sharp angles and steep terrain even more. No wonder this steel arch bridge found its way on this year’s Colorado’s Most Endangered Places.

If you’re traveling from Leadville Today, the bridge carries U.S. Highway 24 north across Tennessee Pass, high above the Eagle River and Union Pacific Railroad track. The town of Red Cliff lies below, with access to Minturn and the Vail Valley beyond. Built in 1940, RCB found its way to the National Register of Historic Places in 1985 as one of only two steel arch bridges in the state and the only cantilevered structure. With the recent announcement, it is now one of 46 bridges on the state’s list of endangered places.

But don’t let those words alarm you. While oftentimes these words can signal an immediate “call to action” for preservation, in this instance, the bridges listed are in good physical condition.  The purpose of the designation is to build statewide awareness and advocacy for highway bridges, assigning them as prime candidates for rehabilitation. The endeavor is spearheaded by the Colorado Department of Transportation (CDOT) which in collaboration with Colorado Preservation, Inc. is undertaking an effort to recognize these structures, representing different designs and eras in bridge-building.

“Colorado’s historic bridge structures are unique pieces of the cultural legacy and distinctive character of so many communities across our state,” said CDOT Executive Director Shoshana Lew. “Receiving this nomination is an opportunity to both honor the heritage of our transportation system and a reminder that our system is aging and requires investment to maintain a state of good repair.”

The Red Cliff Bridge is what is known as a cantilevered bridge, built by using structures that project horizontally into space, supported on only one end. It would be a sight to see it constructed by modern-day engineering methods. Now turn the clock back eighty years and imagine workers hanging over 200-foot drops in temperatures that often dropped well below freezing.

The year was 1940 as the bridge’s designer King Burghardt wrote in his journal, “In the morning, each gang was lifted to its scaffold on a platform hung from the high line. They took their lunches with them and spent the entire day in the air with the winter wind continually blowing up the canyon.” Who has pictures of this?

After 60 years of carrying Leadville residents and visitors back and forth and forth and back, the structure had deteriorated to the point that major restoration work was required. As per Wikipedia:

“The work was completed between March and November 2004 at a cost of $3.6 million, with $1.6 million coming from the Federal Highway Administration. The bridge deck was replaced and widened and much of the steel was repainted. However, because of the bridge’s historic status, care was taken to maintain the visual aesthetic. The rehabilitation effort won the 2005 National Steel Bridge Alliance Prize Bridge Award for the year’s best Reconstructed Bridge.”

With its present-day ‘Endangered Places’ program, CDOT plans to convey the importance of bridges to local and state history and encourage communities to consider their preservation and interpretation in future heritage tourism efforts and as part of improving and developing their transportation infrastructure.

“Historic bridges reflect the diverse geography of the state and the challenges of traversing the variety of landscapes Colorado presents, be it mountains or plains,” said CDOT’s Senior Historian Lisa Schoch. “Preserving these structures, some of which are considered iconic, is another way of telling the story of how Colorado’s highway system developed and the challenges that were required to maintain rural and urban connectivity and sustain the state’s economic and tourist-oriented growth.”

Although being recognized as one of CPI’s Most Endangered Places is a worthy honor, from a road-safety perspective, anytime CDOT is willing to spend time, attention, and resources on any of the portals in and out of America’s highest city, it’s a green light for good news! Congrats to the Red Cliff Bridge and thank you for all of your years of transport service to the thousands living in Leadville Today!

Background of Colorado’s Most Endangered Places

Since 1998, Colorado Preservation, Inc. has been working with communities throughout the state to save endangered historic buildings, landscapes, and archaeological sites through its Endangered Places Program.

This year marks the 24th anniversary of Colorado Preservation, Inc.’s Saving Places® Conference and Most Endangered Places list.  This program provides advocacy, awareness, and technical assistance to significant historic sites throughout Colorado that are in danger of being lost.  Colorado Preservation, Inc. devotes staff time and resources to rally concerned citizens and build local capacity so that listed as well as un-listed sites can be saved.

In 23 years, Colorado’s Most Endangered Places program has highlighted 127 historic sites throughout the state; 50 sites have been SAVED and only seven have been lost. The program has a wide reach, with sites located in every region of the state in 49 of the 64 counties. In Lake County, the historic Interlaken Resort near Twin Lakes is on-the-list! But there should be so many more – check out the website to see how to nominate a place!

A Pass By Any Other Name: Vail Pass

When it comes to high mountain passes and Colorado’s highways the only thing second in wonderment to “how did they build that, there?” is how they acquire their official names? To that end, here’s a link to the story of Vail Pass and the man it was named after. Spoiler alert: it has nothing to do with skiing! Enjoy!

It might seem a little out of the ordinary to be talking about Memorial Day in March, but there’s a good reason for it. March 30 is the deadline to submit an application for engraving on the memorial in order to be complete by Memorial Day 2021. This is an opportunity to honor those who served with a name engraving on the Lake County Veterans Memorial granite plaque. Families from Leadville, Lake County and across the United States can add the name of any veteran deceased or living to the south plaque.

In order to have the plaque readied by Memorial Day 2021, applications and fees ($75 per name) must be received by March 30, 2021. Please consider an engraving or a simple, straight-up donation by contacting Mabe, by email at mbogeart@co.lake.co.us, or by mailing a check to Lake County Veteran Memorial, PO Box 952, Leadville, CO 80461. To download an application: CLICK.

Former Colorado Senator, veteran and Leadville resident Ken Chlouber approaches the Veterans Memorial wall to pay honor during Memorial Day services. Anyone can have a military loved one honored on the Lake County Veterans Memorial granite plaque, but hurry, the deadline is March 30, 2021. Photo: Leadville Today.

Governor Jared Polis and The Colorado Department of Transportation announced the inaugural “Name That Plow” contest, earlier this week. Governor Polis and CDOT are asking elementary school students across Colorado to submit their best and most creative name ideas for 20 brand new CDOT snowplows joining the current fleet. 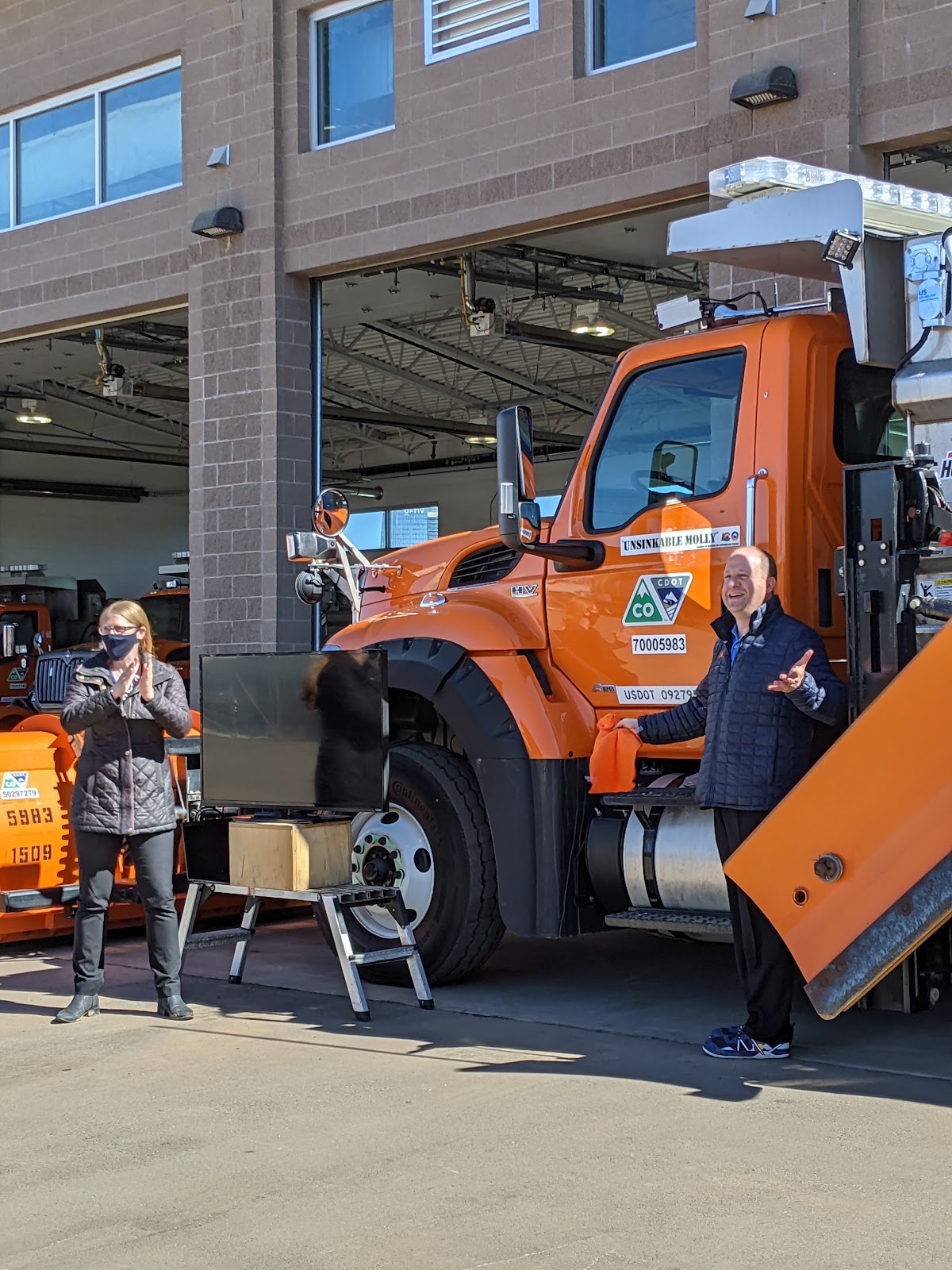 The contest is open to elementary school students statewide. Students are invited to fill out an online submission form on the Name that Plow web page with parental supervision and permission. Submissions are due by Friday, March 26 2021. The winning snowplow names will be announced in early May.

Once the winners are announced, CDOT will get to work printing the 20 plow names on an official snowplow decal which will then be placed on the snowplow (see example below). You’ll even be able to track that plow on cotrip.org in future winters to come! 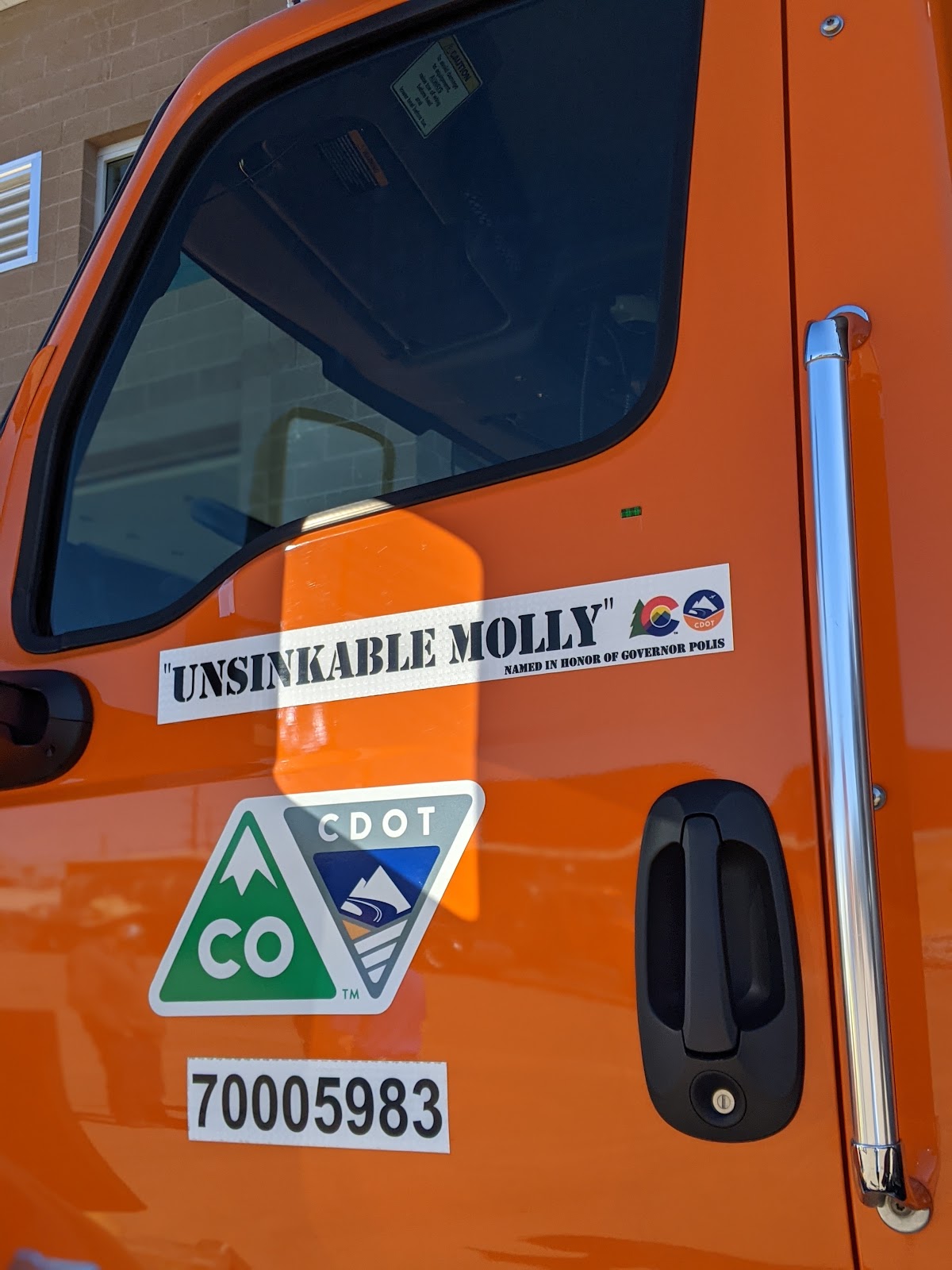 Governor Polis and CDOT can’t wait to see the creative snowplow name ideas submitted by our state’s stellar elementary school students! The options are endless, and we want students to think big and reach for the stars. There aren’t too many rules, but we do have a few guidelines for submissions to be considered in the contest:

Spread the word and get your thinking caps on- and stay tuned for the debut of 20 named snowplows in May!

Sinkhole? How About A Mine Shaft!

Between Winter and Spring in Leadville

Bridging the Past, Present & Future