A roadside memorial was created by the friends and co-workers of a 30-year-old Leadville woman who died in a single-vehicle crash on Highway 24 on September 30, 2021.

#SadNews to report from @Leadville Today as officials from the Colorado State Patrol released the following details regarding last night’s fatality on Highway 24 west in an area known locally as Escondido Flatts. The victim has not been officially identified yet, so please be respectful.

“At approximately 10:30 pm on 09-30-21, a jeep wrangler was WB on HWY 24 at approximately MP 172 veered off the right shoulder for 42 feet and collided with a guardrail, over-corrected and went back across the road and went off the road for 119 feet and hit a tree.  The 30-year-old female from Leadville was ejected and died at the scene.  Excessive speed is a factor for the crash.”

The signs will change – again – but this time regular customers and travelers to Leadville’s convenience stores will see a grateful upgrade to the supply chain of all the things that keep people Kuming-n-Going and Grabbing-n-Stopping in America’s highest city.

“You won’t have to go to Safeway anymore,” joked Sunny Suraj, a familiar face and the regional representative for the Fast Stop Markets, as he assembled and stocked the new, expanded displays at the Mountain View Drive location. In August 2021 the two in-town (former Kum-N-Go) locations were acquired by new owners (again) and will undergo rebranding under the Fast Stop name along with the former Saturday’s Mercantile. While there seem to be a few operating components to these convenience store operations (gas/grocery/retail) for consumers and commuters, it means more of what they need in one place.

While the expanded option of basics is a ray of sunshine it isn’t the rainbow of promises that city and county officials have been serving up residents for years when it comes to grocery options in America’s highest city.  Regardless this corporation listened to consumers, saw the opportunity for expansion, and did so. Stop in and see what’s new in their upgraded coolers and expanded aisles. Suraj is the regional manager of the three Fast Stop acquisitions in Leadville and a familiar face at the downtown location. He added that new gas pumps will also go in at the Mtn View location, hopefully, access will improve with a new arrangement.

Welcome Fast Stop! Although locals will likely continue to refer to them as Saturday’s and the ever-iconic downtown Kum-n-Go, where so many late-night stories began in the late 1990s.

The new EV Charging Station is located in the public parking lot at 3rd & Harrison in downtown Leadville,

Across the street from that location, the thing making headlines is the newly installed EV Charging Station.

That’s right America’s highest city is celebrating National Drive Electric Week (Sep 25-Oct 3), a nationwide celebration created to raise awareness of the benefits of all-electric and plug-in hybrid vehicles. The new station was installed earlier this month but it could be sometime before it’s operational.

“The station is in place but can’t be functional until Xcel makes the connection to three-phase power on the other side of Harrison. As soon as the power is connected, the install crew will come back to complete the installation process,” stated Leadville Mayor Greg Labbe in an LT Facebook conversation.

There is also an EV Charging Station located at the new St. Vincent Health on W. 4th Street in the hospital’s parking lot.  Find other electric vehicle (EV) charging stations in communities across Colorado.

While the EV Charging station may represent Leadville’s commitment to the 21st century, the scaffolding coming down across the way represents its dedication to historic preservation from the 18th century. Yes, as September closes out, the scaffolding at the historic Tabor Opera House begins to come down, revealing the top stories renovations on the facade. The lower-level work will continue on the multi-million renovation.

Circle K in the Pb

A bit further down the avenue, the Circle K has also seen a significant upgrade and not just on the outside. While the Harrison Avenue signage took a while to get straightened out, word on the curb is that the flapping banner may have lit the fire under a much-needed upgrade as it captured executives’ attention during an earlier visit. Let’s get this store in order!

So thanks to Ray-the-Manager and his hard-working crew, customers now have a significant food-on-the-go and basic grocery upgrade. Last year’s gas pump and outside lighting was a welcome enhancement for the welcoming storefront on that end of Leadville’s main drag.

“We’re excited,” said one of the clerks during a seemingly never-ending rush of people and vehicles.  The new décor is bright, it’s vibrant and overall looks like a safer shopping experience for the fast-paced lifestyle that is now prevalent in Leadville Today.

And finally, an update on the Big R going into the former Shopko/Alco big-box location on Highway 24 south. In addition to the ongoing and recently ramped-up activity at the building, inside expert Big R crews have arrived to set up displays for inventory, there has been recent communication from the corporate folks as well. Just in time for holiday shopping – Halloween? Thanksgiving? Christmas? Stay tuned – it’s closer than you think!

Well, that’s a wrap for this business report regarding expanded and upgraded conveniences in America’s highest city. Get out and support local businesses and remember the folks behind the counters ARE your friends and neighbors in Leadville Today!

Firefighters on the Ptarmigan Fire today continued to focus on using aerial resources to keep the fire from moving downhill towards structures.Three heavy helicopters and a light helicopter dropped water on active areas and a large air tanker dropped retardant to slow fire growth. Aircraft will continue this work tomorrow as conditions allow.

While afternoon and evening rains helped moderate fire behavior, the weather grounded the aircraft. The winds that preceded the storms pushed the fire to the south, leading to additional pre-evacuation notifications. The fire currently estimated to be 85-100 acres with approximately 100 firefighters. There is no containment, and the cause of the fire is under investigation.

The latest information on evacuations are available by signing up for Summit County Emergency Alerts (https://summitcountyco.gov/1149/Summit-County-Alert)  and at https://www.facebook.com/SummitSheriffCO. A Red Cross Emergency Shelter is in place at the Summit Middle School.

There will be a public briefing tomorrow at the Silverthorne Town Hall, 601 Center Circle, at  6 p.m. The meeting will be livestreamed on the Summit County Government’s Facebook page. Current information is available on Inciweb: https://inciweb.nwcg.gov/incident/7857/, Facebook https://www.facebook.com/WhiteRiverNF, and from the Ptarmigan Fire Hotline at 970- 668-9700.

The Ptarmigan Fire is located northeast of Silverthorne, Colo. and is currently (9/29/2021) estimated to be 85-100 acres with no containment. The cause is under investigation. Moderate showers are expected by the afternoon with a mix of rain and snow.

The Colorado Department of Transportation has cancelled the planned night closure tonight of the eastbound lanes of I-70 in Glenwood Canyon due to the forecasted weather in the canyon. A closure is still scheduled for Friday, Oct. 1 from 10:00 p.m. to 6:00 a.m. and now planned for Sunday, Oct. 3., to allow work to take place. A safety closure is currently in place on I-70 in Glenwood Canyon between Exit 116 (Glenwood Springs) and Exit 133 (Dotsero) due to a mudflow and a Flash Flood Warning.

Crews continue to work on this stretch of I-70 through Glenwood Canyon.

The overnight closures on Friday and Sunday will allow crews to conduct work that is essential to rebuild the eastbound retaining wall that supports the eastbound lanes. Westbound lanes will not be affected and will remain open. The closures will require that eastbound travelers use the recommended northern alternate route (more information below). The eastbound closure point will be Exit 116/Glenwood Springs.

On July 29 and 31 of this year, the canyon was impacted by several major materials slides, including mudslides. The debris did considerable damage to the interstate at Mile Point 123.5, known as Blue Gulch.

Motorists traveling eastbound are encouraged to utilize the alternate route (please see map below). That route is CO 13 Rifle to Craig, east on US 40 to Steamboat over Rabbit Ears Pass to Kremmling down CO 9 to Silverthorne. 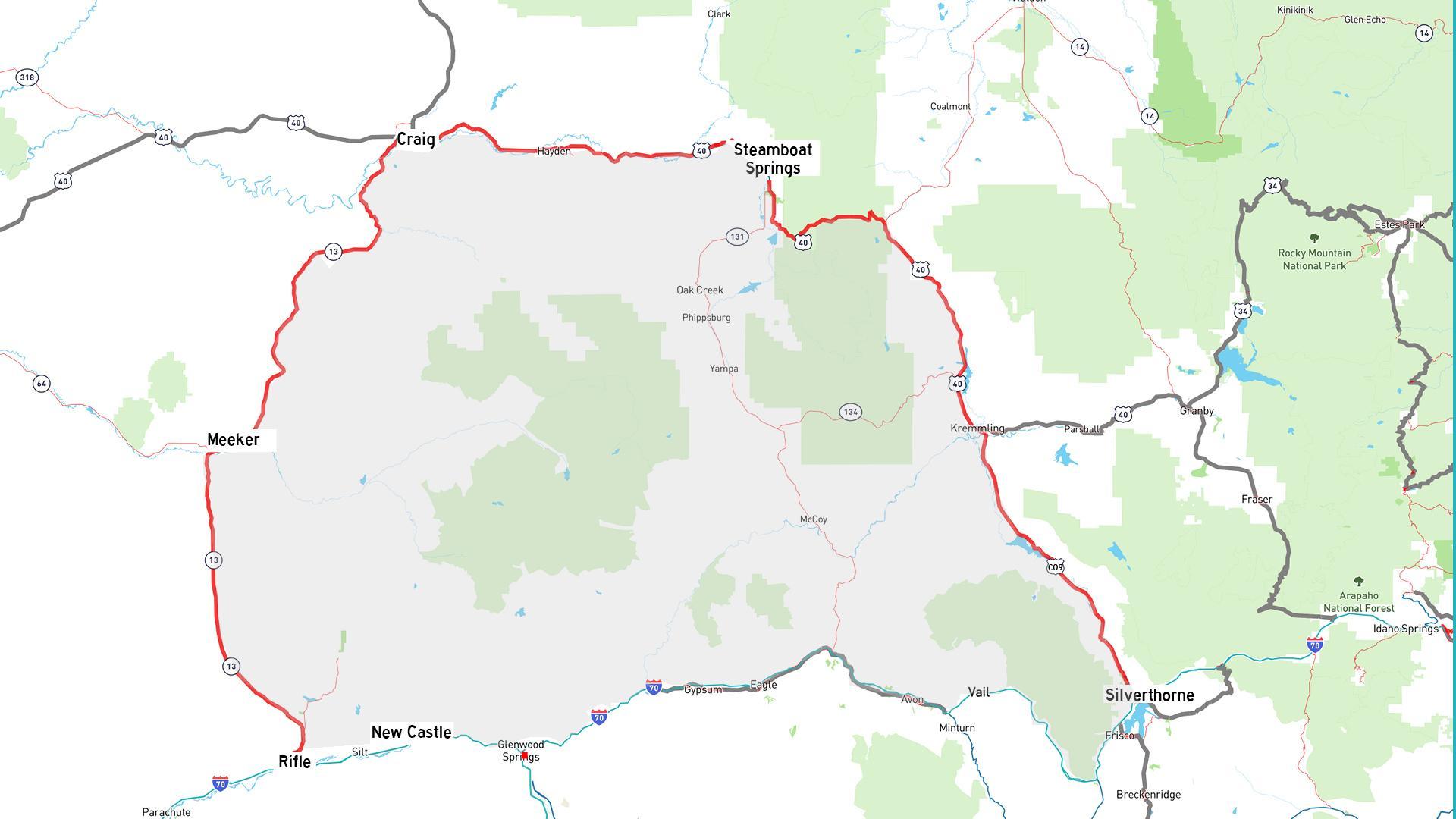 Stay Informed and Connect with the Project:

Frozen In Time. Gilman, located northwest of #Leadville on Highway 24, appears frozen in time, with only the seasons changing around the hillside town, which was once alive with families and activity.

“The public will have the opportunity to ask questions and learn more about the proposal as well as the Forest Service’s process for evaluating the portions that cross National Forest System lands,” said Eagle-Holy Cross District Ranger Leanne Veldhuis.

The 8.9-mile line would run southeast from a substation east of Avon, pass through Minturn town limits, and terminate at a substation just above Gilman, an uninhabited old mining town on Battle Mountain. Holy Cross Energy is proposing the line to provide increased service reliability as the electrical load increases in Eagle County communities.

The draft EA and information about how to comment are available at https://www.fs.usda.gov/project/?project=57224. Comments need to be received by Oct. 22, 2021.

Flag on the Play: Federico Field

Come and Get It at Big R

The History of Leadville’s Water

An Arboreal Assault & A Climate Report